6 Best Things To Do In Rittenhouse Square

Rittenhouse Square is one of the five original squares designed by Philadelphia founder William Penn. He wanted to create a “Greene Country Towne”. He envisioned Philadelphia with lots of individual lots lined with orchards and trees and centered around public spaces, and he modeled this new settlement around the great parks of London. Penn believed that small squares would help stop the spread of disease and fires he remembered as a kid. He proposed it to settlers in the late 17th century in hopes of recruiting them to leave Europe and populate Pennsylvania. Centuries later, its five squares remain: Logan, Franklin, Washington, Center and, finally, Rittenhouse, the center of one of the city’s most beautiful neighborhoods.

Rittenhouse Square was named after David Rittenhouse, an astronomer and watchmaker. It’s a family-friendly park surrounded by exclusive high-rise apartment buildings, top-class restaurants, and high-end boutiques. It is located in the heart of Center City on 18th and Walnut Streets. The popular park and the surrounding area are worth an afternoon or an overnight stay. Aside from dining and shopping, you’ll discover art galleries, pubs and wine bars within walking distance of the park, which should be your first stop. Here are some of the best things to do in Rittenhouse Square and where to enjoy some excellent meal afterward.

Rittenhouse Square is one of the largest parks in Philadelphia and is beautiful. The main corridors run diagonally at the corners and meet in a central oval. There is a large flower bed as well as urns and statues filled with flowers all over the square. The lampposts are richly decorated and give the flair of the old world. Inside are five famous statues including the lion crushing a snake by French romantic sculptor Antoine-Louis Barye. The original work, created in 1832, is an allegory of the French Revolution. This bronze cast symbolizes the power of good (the lion) which defeats evil (the serpent) and dates from 1890.

Next up is a reflective pool with Paul Manship’s Duck Girl, circa 1911, depicting a girl holding a duck under her left arm. At the southwest end of the park is Albert Laessle’s two-foot bronze billy goat. It’s a kid’s favorite, and just steps away is Cornelia Van A. Chapin’s granite sculpture of a giant frog.

Finally, the most important statue in the square, the Evelyn Taylor Price Memorial Sundial, honors Evelyn Taylor Price, the President of the Rittenhouse Square Flower Association and Improvement Association. The sculpture, created by Philadelphia-born Beatrice Fenton, appears to be two children holding a sunflower, but in reality. it is a sundial. It honors Evelyn Taylor Price’s love for flowers. People lay out blankets for sunbathing or picnicking, reading and enjoying the lush grass and beautiful flowers and trees in this historic square. 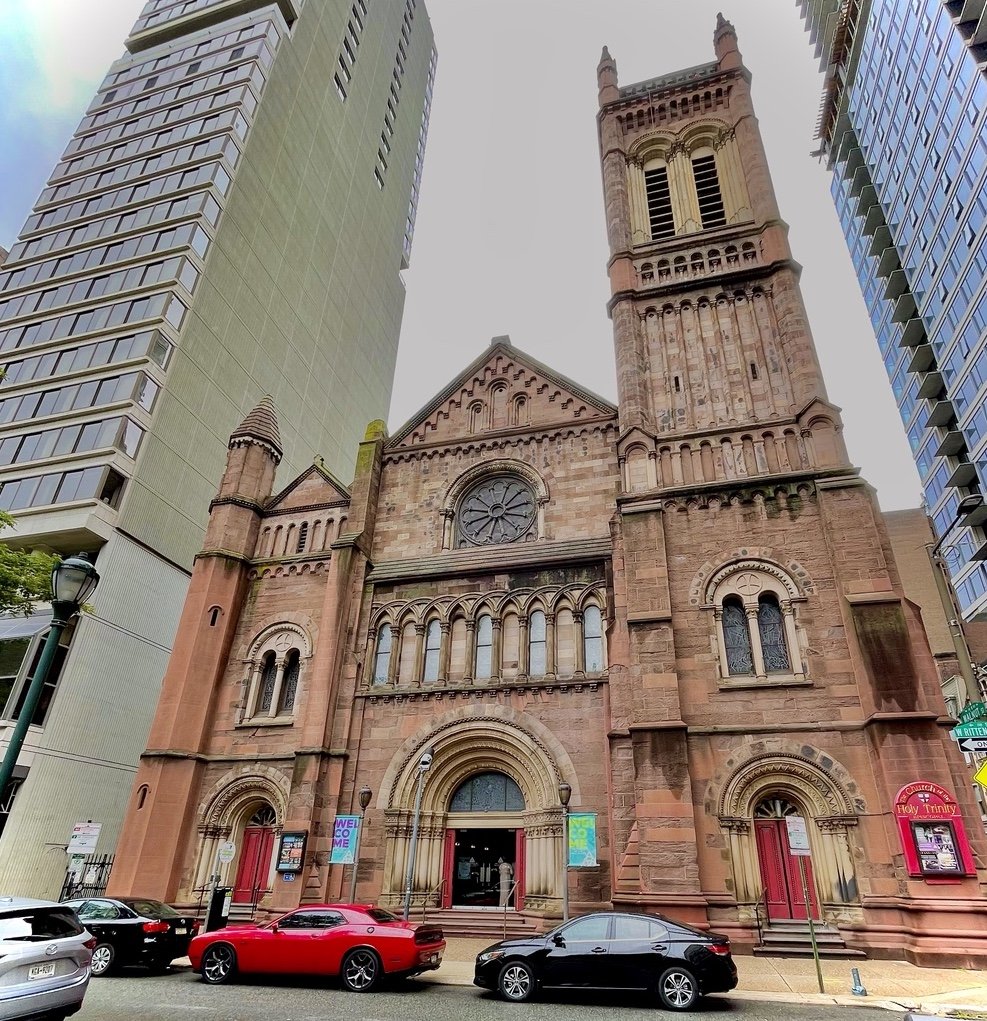 2. See the Church of the Holy Trinity

Since 1859 this “low church”, which follows simple liturgies, was conceived by professionals and wealthy merchants who wanted a new episcopal parish for worship on the square. These men chose the Norman or Neo-Romanesque design by architect John Notman and built it in sandstone. The history of the Church of the Holy Trinity shows that it stood by its neighbors and has been inviting everyone to worship ever since. Various benefactors added vaulted ceilings, Victorian stencils, beautiful stained glass, and a 25-bell carillon cast in Belgium. It’s worth stopping inside to see the beauty of this historic church and admire the building that has stood the test of time above Rittenhausplatz.

3. Visit the Rosenbach Museum, the library and the garden

The Rosenbach owns “a collection of nearly 400,000 books, manuscripts, visual and decorative art objects, including some of the most famous literary and historical objects in the world”.

The booksellers Phillip and Abraham Rosenbach lived in the town house, which is now the museum. They became so famous that they could buy collections and rare books and often beat their competition. Abraham Rosenbach was able to secure the original Lewis Carroll manuscript, Alice’s Adventures Underground, which was given to Alice Liddell in 1863 and published as Alice’s Adventures in Wonderland. Alice Liddell Hargreaves sold the manuscript that Carroll had given her and illustrated by hand. She needed the money to support her estate after her husband died. Rosenbach’s offer beat that of the British Museum and he sold it to a collector in 1928. After the collector’s death, Rosenbach bought it again and donated it to the British Museum in 1948. He did this to honor the British people and their service in World War II in the fight against Hitler.

During your visit, lecturers will take you into the world of these fascinating men who have collected literary treasures (many on display) and art. For the first time in years, the gardens behind the townhouse are open to tours, planted with flowers associated with the literary masterpieces inside. Access is included in your entry ticket. 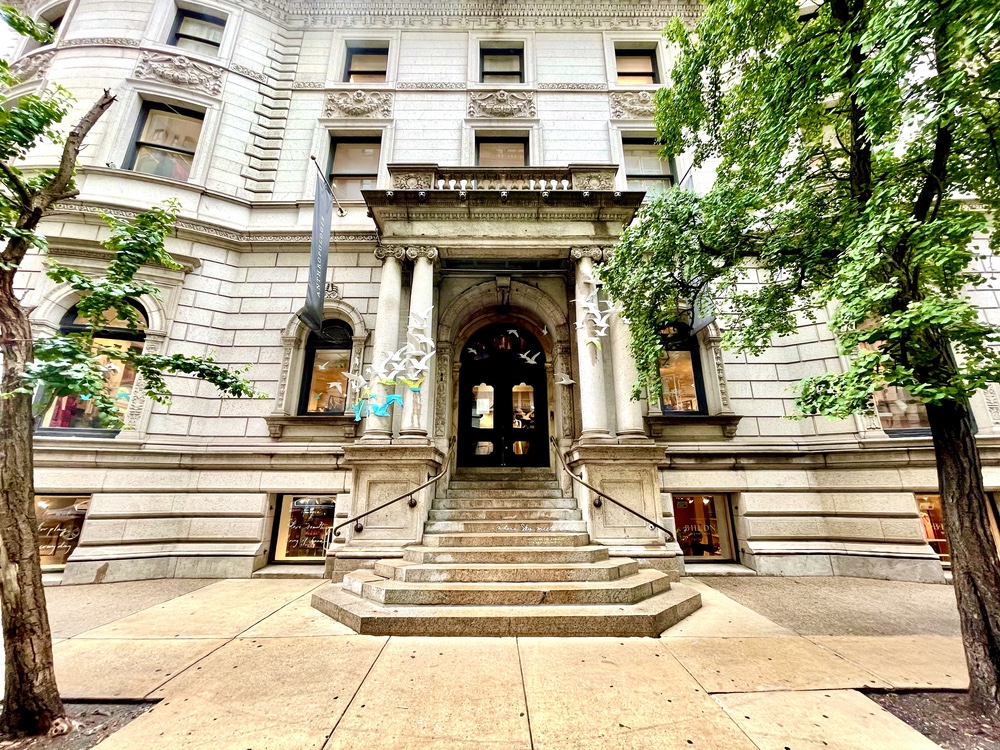 4. Shop till you drop

The Anthropologie flagship store, a trendy boutique for women’s clothing and home furnishings with gifts, candles, beauty and wellness products, accessories and shoes, is located on 18th and Walnut Streets. It’s five floors of shopping nirvana in a breathtaking villa.

Shop for the ultimate in designer fashion at Boyds Philadelphia for mens and womenswear. The neighborhood boutiques are along Walnut Street, Chestnut Street and in a mall, the Shops at Liberty Place. I like to go in and out of the boutiques while strolling the streets. There are many different types, from shoes to sports stores to beauty salons; You could spend all day shopping or grocery shopping, having a coffee or a treat on the go. 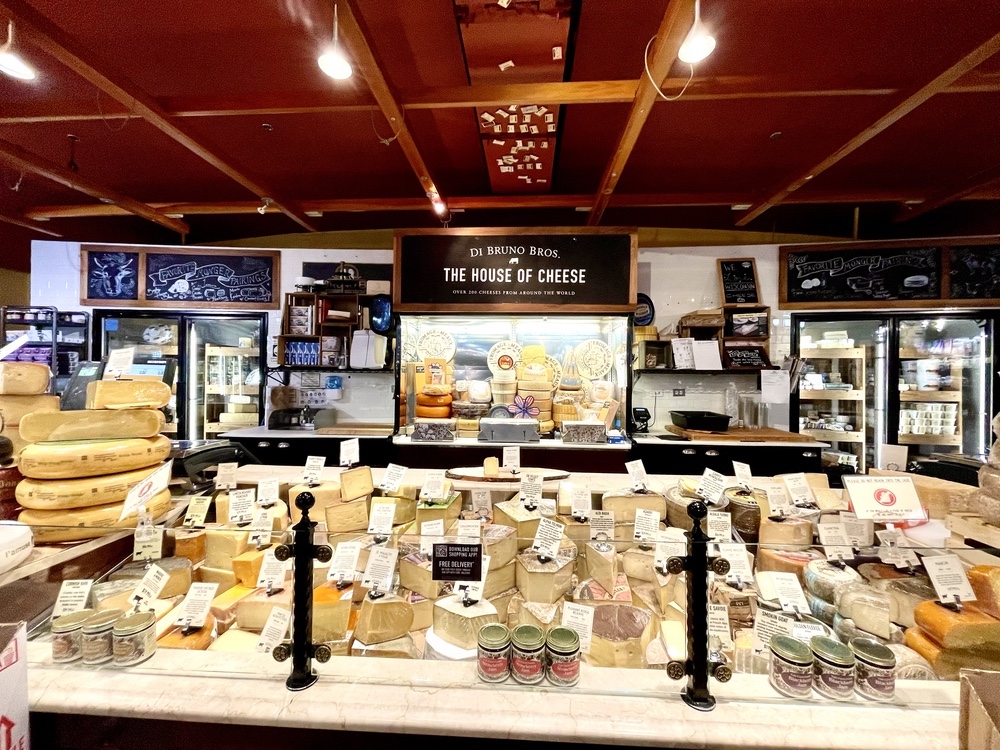 If you’re a foodie, stop at Di Bruno Bros. This is a specialty market that sells ingredients and fresh groceries from vegetables to charcuterie, bread and pastries, as well as the famous cheese cave. The cave is a bakery counter that sells delicious cheeses from around the world. The store takes cheese seriously and works with wine, beer and cider suppliers to offer unique collaborations with cheese. You can try everything and ask the vendor to suggest which cheeses go with different types of meat and accompanying spreads or crackers to make the best sausage boards imaginable. Di Bruno Bros. has been providing quality meat and ingredients since 1939, until one day in 1976 it was realized that the big chains could ruin their humble grocery store. A trip to Europe changed everything. You became a specialty cheese shop and the rest is history. You can buy cheese here and you can also find groceries here. 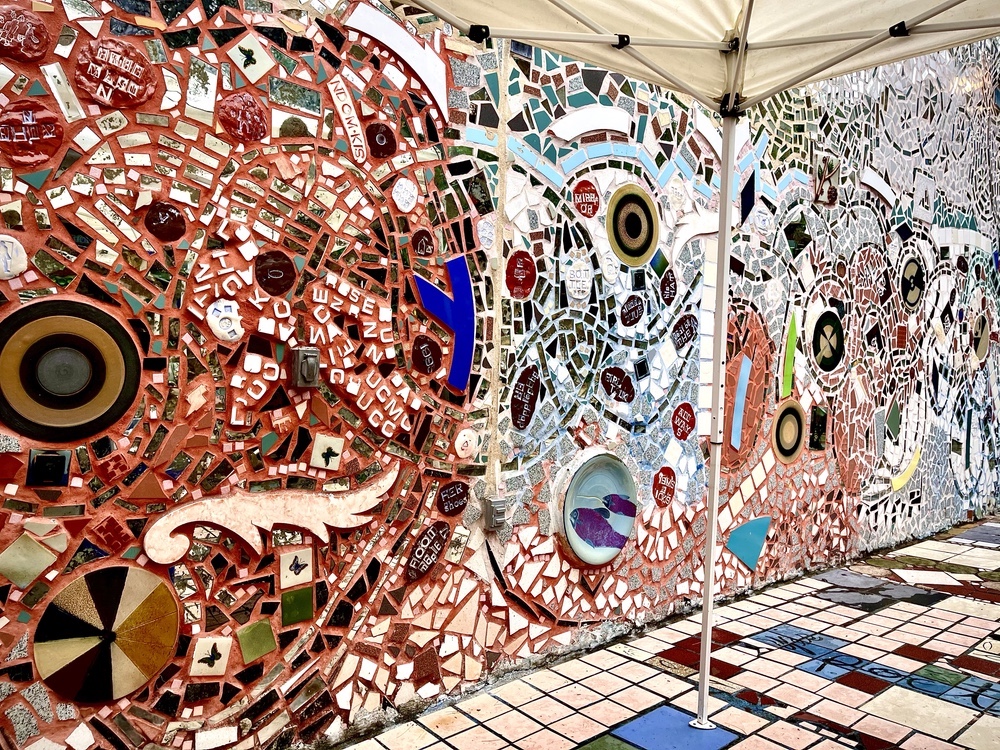 6. Walk or ride a horse to Philadelphia’s Magic Garden

Take a long walk or take a taxi to tour Philadelphia’s Magic Gardens, a mile from Rittenhouse Square. Artist Isiah Zagar is an award-winning mosaic mural painter. His work graces walls in Philadelphia and around the world. He began working on the vacant lots near his studio on 1020 South Street, decorating them with his beautiful mosaic designs. The landlord sold the land and wanted to demolish Zagar’s factory. Instead, the community rushed to support the artist. Today it’s a non-profit neighborhood and museum that spans half a block plus an outdoor and indoor gallery. You will be amazed by murals made with tiles, mirrors, found objects, and other non-traditional materials. Buy tickets online for regular admission. On weekends, you can book a guided tour to learn more about the artist and his incredible work.

There are several fantastic restaurants, wine bars and pubs around Rittenhouse Square. So make sure you make a reservation and choose an outside table to take in the park views on a nice day. 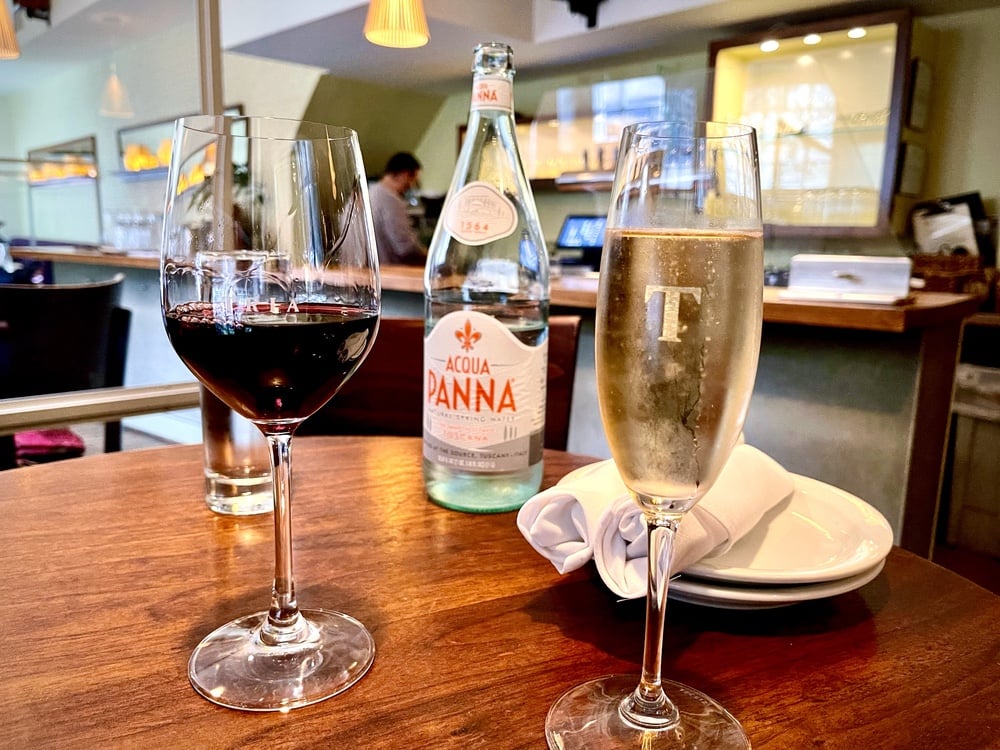 The Tria Café offers wine from smaller producers, cheese platters and beer. The bites are fantastic and there are barista-style coffees that can be paired with the flourless chocolate cake. Stay for a bite or lunch.

Parc is an all day brasserie in the square. Order a croissant and a café au lait or lunch, brunch or dinner. Salad Niçoise, escargots, steak fries and eclairs are served as classics. Ask for a table outside. 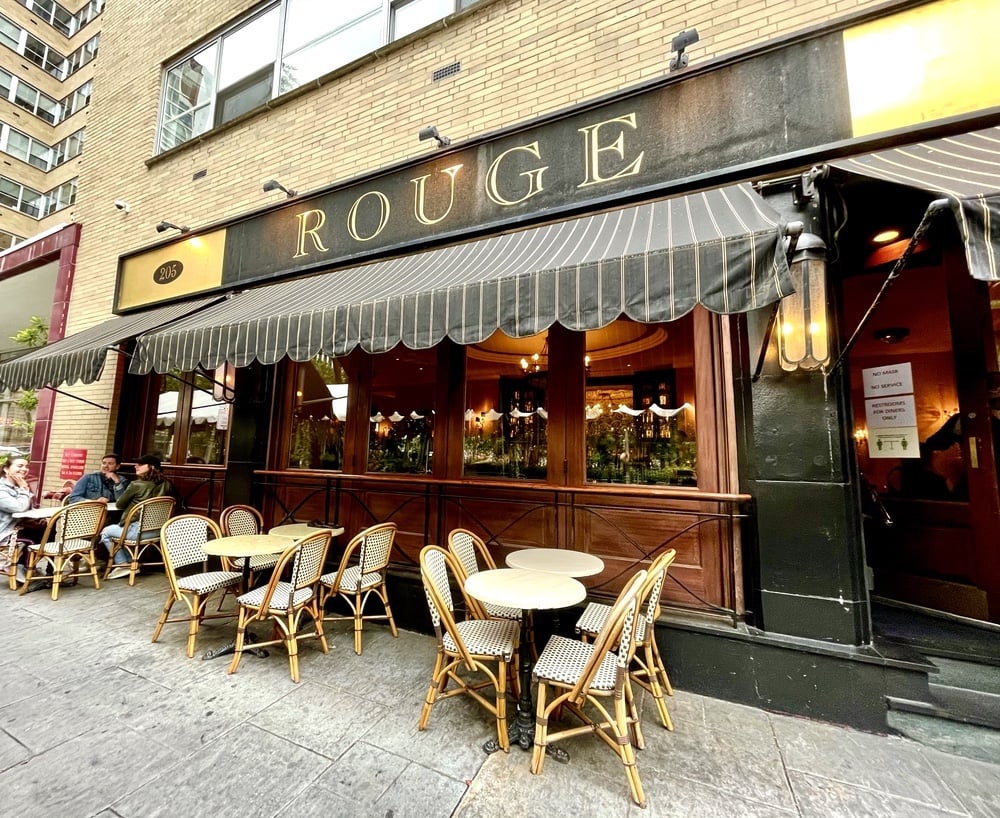 Rouge is the perfect perch for Sunday brunch or drinks and nibbles. It’s right on the square so the view is wonderful both outside and inside the classic room. The bistro offers burgers, salads, steak and oysters on the half-shell. It’s versatile and elegant.

The Dandelion is a British pub. They serve rare draft ales, afternoon tea, fish and chips, a fantastic burger, shepherd’s pie, and family style roast on Sundays. It’s a beautiful space inside so stop by for a drink and a pub grub.

If you want to stay the Rittenhouse Hotel is lovely. Monk’s Café is a beer drinker’s paradise. The Philadelphia Art Alliance, an art museum across the street, will reopen in mid-August. And for more foodie inspiration, see Eating Around The World In Philadelphia: 7 Dishes You Must Try.

Editor’s note: Jeanine’s source for the information presented in the first paragraph of this article can be found here.

Outside the Solar Eclipse Zone? Here’s How To Watch Online

Shopify vs Squarespace | The Best Platform for Your Site in 2021

How Instagram Turned Fashion Icon Liz Korn to a Superstar

Why the Bitcoin Bust Could Finally Drop GPU Prices